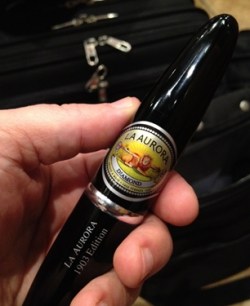 Since (Black) Diamond’s initial release, we have spent many an hour enjoying the flavors and complexity this little vitola has to offer.  Like it’s five (5) predecessors, Diamond comes in a metal tubo.  This particular little gem is filled with intense flavors, a wonderful aroma and near-perfect balance.  Covered in a gorgeous dark Connecticut Broadleaf wrapper, this cigar came in at #3 on our list of Top-10 Full Cigars for 2012. 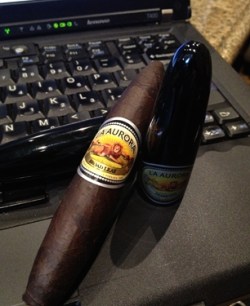 Looking back at previous Preferidos, the one blend that seemed to stand out from the rest was the Emerald (Ecuadorian) – which captured Cigar Aficionado’s #7 spot for cigar of the year back in 2006.  The early success of this line has captured the hearts of many cigar enthusiasts.  So we were very excited to hear a new vitola was being added to the collection.

So, without further adieu, let’s take a closer, more in-depth look at the (Black) Diamond Preferidos.

VISUAL:  Diamond is a rich, chewy looking little cigar covered in a deep, dark brown (almost black) Connecticut Broadleaf wrapper.  The perfecto shape is amazingly symmetrical, smooth and elegant to behold.  The band is an oval shape consisting of the La Aurora lion logo centered on a silver backdrop outlined in black.  Very slight veins are barely visible along the wrapper. Slight bumps are also visible along the wrapper. 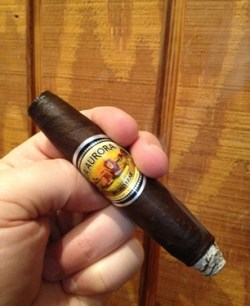 FLAVOR: Prelight: I opt for a straight cut – removing about 3/8 inch from the cap. On the initial dry draw I am greeted with a rich hearty taste of cocoa mixed with earth and a slight cedar spice. I take a moment to smell the unlit foot and shaft of the cigar – which reveals that classic fresh barnyard scent mixed with slightly-sweet tobacco.  Light: For the light, I chose my trusted Xikar Flash single-torch lighter. I toast the perfecto’s point and slowly take my first few puffs. As the smoke reaches my mouth I am greeted with a more amped up coffee-espresso note mixed nicely with more cedar and spice. There is also a good amount of smoke coming from this gorgeous little stick.  The cocoa and espresso notes coming from this cigar are extremely rich, almost intoxicating.  The balance of these flavors coupled with the earthiness, cedar and spice make for a very enjoyable experience.  This is without a doubt one of the finer maduros I have had in a very long time.  The one slight (as in very slight) knock is that the cigar’s flavors pretty much maintain throughout the entire smoke.  Not a lot of complexity, but what you DO get is a very pleasant smoking experience from start to finish.  The flavors of this cigar are definitely in the full-bodied category, nicotine levels start out medium-plus and work their way up to full as well. 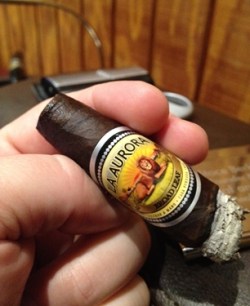 EXPERIENCE:  Burn:  Perfectos are notorious for having burn issues.  The Preferidos Diamond however, is not your typical perfecto.  This cigar simply burned flawlessly from start to finish.  As seen by each of the pictures, the black-line is barely visible and near razor-sharp.  As I approached the center of the perfecto, there was a slight touch of unevenness, but things quickly adjusted themselves without any touch-ups whatsoever.  The smoke production from this little cigar was amazing, each puff provided a thick, heavy smoke accompanied by a ton of flavor.  Another plus to this cigar was the aroma coming from the smoke itself.  The scent of coffee mixed with baked cinnamon coupled nicely with the flavors of espresso, earth and cedar.  Draw:  One word, Flawless.  Not too tight, which is often the case with small perfectos.  Not too loose, which can also happen when tobacco isn’t packed well enough.  In all honesty, if you were blind-folded and took a draw, you would not be able to tell this cigar was a perfecto – that’s how good the draw is on this cigar. 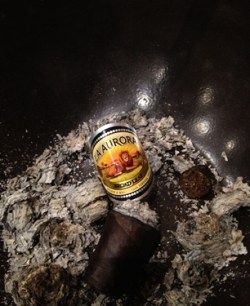 FINAL THOUGHTS:  Whenever I smoke a perfecto, I am always hesitant to be overly critical because of the number of issues that often occur while smoking them.  Perfectos are a delicate shape requiring a high degree of skill and artistry to roll correctly.  Past experience has shown me that for every 4-5 perfectos smoked, 3-4 of them will have some sort of issue – be it tight draw, uneven burn, canoeing, tunnelling or simply requiring a number of touch-ups to keep it lit.  With Preferidos Diamond, all of those worries are tossed by the wayside.  Of the numerous cigars smoked before writing this review, the only thing I encountered was a slight uneven burn that always corrected itself.  This cigar was simply fantastic from start to finish.  All that being said, there is one drawback – the price.  Preferidos Diamond retails between $18-$21 dollars depending on your location.  A pretty hefty price when taking the actual size of cigar in to account.  If money were not an issue for me, I’d love to have these in my normal every-day rotation.  But that simply is not the case.  So for me – like most of you – these will be stored, treasured and locked away for special occasions.  Search the world over and you’ll be hard-pressed to find a better perfecto anywhere on the planet – and with that, I give you my final score.  Final Score: 94