S.A.G. Imports announces the release of an all-new cigar called the Fonseca Cubano Exclusivo. Billed as a full-bodied box-pressed cigar, Exclusivo will be a departure from Fonseca’s more light (mild) cigar offerings.

Cigar Aficionado first broke this story, stating the cigar would be introduced at the 2013 ProCigar festival in the Dominican Republic.

The Fonseca Cubano Exclusivo will be made at S.A.G.’s MATASA factory in the Dominican Republic. Unlike Fonseca’s other full-bodied offerings, this particular cigar will retain the standard Fonseca band. (shown above) This band is more commonly associated with the brand’s milder offerings. According to S.A.G. Imports, there will be four (4) different sizes in the line. ()

Here is a breakdown of the Fonseca Cubano Exclusivo blend: 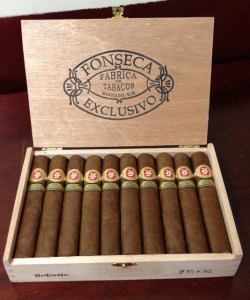 Those familiar with the Fonseca line may also remember these previous fuller-bodied offerings:

In terms of availability, Cubano Exclusivo is to be released to the general public sometime in April. No further details are known at this time.