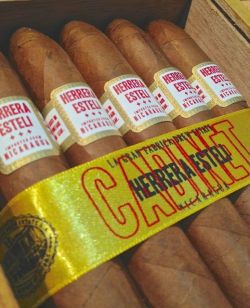 Since joining the ranks of Drew Estate, Herrera Esteli brand leader Willy Herrera has been hard at work selecting tobaccos, creating and analyzing test blends and putting together a core team of torcedores (cigar rollers) to bring his cigar visions to life.

With Drew Estate being one of the leading Nicaraguan cigar makers in the industry, some may ask what Herrera can bring to the table. The answer, Herrera brings a deeply rooted Cubanesque style of cigar making – from flavor right down to classic old-school packaging. Back in August we had a chance to sit down and smoke with Herrera at the Chattanooga Tweet-Up event held at Burns Tobacconist. Based on our conversation and the samples we smoked, I am confident Herrera Esteli will be popular among cigar enthusiasts everywhere. A masterfully crafted cigar, reminiscent of that classic old-world Cuban style and taste. 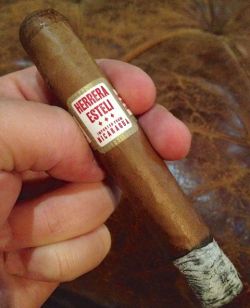 During our conversation, Herrera mentioned his line will consist of 5 different shapes and sizes – all featuring a unique blend of Ecuadoran Habano wrapper, Honduran binder and Nicaraguan fillers from Esteli and Jalapa:

For those who are not familiar with Herrera’s previous work, he spent six years at El Titan de Bronze – located in Miami Florida’s famed Calle Ocho district. It was there Herrera honed his cigar making skills. His creations are many and include such favorites as: LaPalina’s Goldie No.2; Miami Cigar’s Casa Miranda; Padilla’s Miami Maduro; and Chinnock Cellars’ Terroir.

One final note, according to the Cigar Aficionado article Herrera Esteli will not be a limited release. However, due to limited initial quantities the line is only being offered to 50 existing Drew Estate accounts.