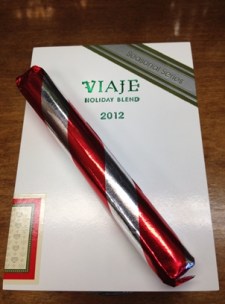 “…City sidewalks, busy sidewalks, dressed in holiday style.  In the air there’s a feeling of Christmas…”  And what better way to ring in the Holiday Season than with a premium hand-rolled cigar and a nice fat pour of your favorite drink?  Even better if the cigar and drink themselves are a holiday seasonal treat, right?  So today we turn our attentions to that feeling of Christmas and focus on the always hot commodity, Viaje Cigars.

In a very short period of time, Andre Farkas has built an incredible niche empire in the world of small batch (boutique) cigars.  By now I’m sure most of you are familiar with the fact his products all come out of Honduras.  But here’s a little (perhaps lesser-known) fact for you, as sited in Cigar Aficionado, Viaje ”used to contract cigar production out of the Joya de Nicaragua factory before later moving production to Raices Cubanas in Honduras.“

Now fast-forward to 2010, where Cigar Aficionado scored the Viaje Oro Reserva (VOR) No.5 with a solid 95 rating – good enough to capture the overall #2 cigar for 2010.  One year prior, Viaje launched their inaugural Holiday Blend, which featured a gorgeous, deep dark-brown Criollo wrapper.

Today, we turn our attention to another one of Viaje’s Holiday Blends – the all-new 2012 Holiday Blend Candy Cane.  The Candy Cane comes in a striking two-tone wrapper.  At the time of this review, details about this cigar’s construction have not been fully released.

Back in August, we had a chance to speak with Andre at the annual IPCPR convention in Orlando.  It was there he shared his multi-year vision of wanting to put out a barber-pole blend.  Now, after years of setbacks and frustrations, we finally get a chance to reap the fruits of that labor.  So, let’s get down to business… 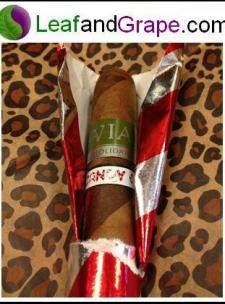 VISUAL:   First off, the cigars come in 20-count boxes decorated in solid white with green, red and silver accents.  Upon opening the box, you are presented with a gorgeous display of color.  Each stick has been individually wrapped in red and silver aluminum foil – representing a candy cane.  Pealing back the wrapper unveils a gorgeous looking masterpiece of a stick.  As you can see from the picture, the two-tone wrapper is striking – a perfect balance of khaki and medium brown.  The stick contains two bands:  1) the traditional Holiday Blend band in green and silver; 2) a second all-white band with the words “Candy Cane” spelled out in red and white candy cane features text. 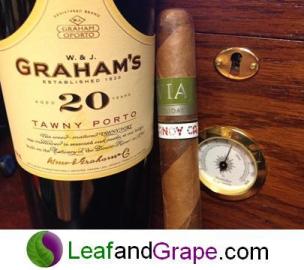 FLAVOR:  Pre-Light:   Pulling the cigar from its foil I immediately noticed the wrapper extended down over the end of the cigar to create a closed-foot.  Which means a decent dry-draw would be out of the question.  So, I opted to hold the cigar up to my nose and see what aromas were present.  I was greeted with a muted scent of a fresh pasture.  (those Budweiser Christmas commercials immediately came to mind.  You know the ones, where the Clydesdale horses are roaming through the pasture and snow-covered hills and fields.)

Light:  Next I reached for my trusty Xikar Flash lighter and toasted the foot of my Candy Cane.  Once I had it glowing solid orange, I took my first taste.  The initial draw sent a shot of spice right at me.  Nothing too over-powering, just a little unexpected based on the muted fragrances I was getting from smelling the wrapper.  The spice quickly faded and gave way to pleasant flavors of earth, leather, tea and floral notes.  Throughout the smoke I would occasionally pick up hints of cocoa and bitter chocolate, then the tea / flower and leathery earth notes would come back and trade-off.  This happened pretty much trough the entire cigar.  A nice balance of back-and-forth flavors working their way through the entire cigar.

EXPERIENCE:  Burn:  The burn was definitely not razor-sharp, but it did burn evenly from start to finish, requiring only a two touch-ups.  The ash produced was a darker grey with hints of black, brown and silver mixed in.  From an aesthetic perspective, this took away slightly from an otherwise flawless looking cigar.  I’m thinking the cigar just needs a little age to settle things down a bit and get all 3 tobacco types working in unison.  Draw:  The draw itself was very good – not too tight, not too loose – just where I like it to be.  As mentioned earlier, the flavors coming off the pre-light were muted by the closed foot.  But this does not affect the over-all scoring or the experience.  Complexity:  As previously stated, the flavors really worked well together in this blend.  The ebb and flow of flavors as they waved back and forth was amazing to experience, and overshadowed the slight burn issues I had.

FINAL THOUGHTS:  Smoking the Viaje 2012 Holiday Blend Candy Cane was a pure joy.  My only regret was firing one up so soon for this review.  Had I sat on this stick a little longer, I’m sure the burn issues would’ve worked themselves out.  Then again, had I done that you wouldn’t be here reading this article right now.  (good thing I bought a few extra)  Score:  92