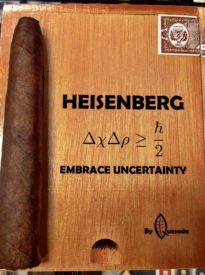 Mid-afternoon yesterday, there were sightings on Twitter about people and brick and mortar shops across the country  receiving samples of a new Quesada concept cigar known as The Heisenberg.  This concept cigar gets its name from German Theoretical  physicist Werner Karl Heisenberg – who won the Nobel Prize in 1932 for his work in Quantum physics.  Within Quantum physics, there is this notion called an Uncertainty Principle. (click here to see video illustration by minutephysics)  This principle states the more precise a position of some particle is determined, the less precise its momentum can be known.

Relating this concept to cigars, the idea is:  the more we focus on one aspect of a cigar, the less we know about another aspect.

Contents of the Heisenberg Project include the following: 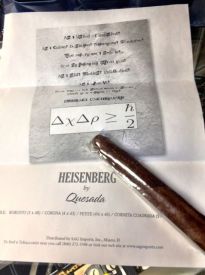 The Heisenberg project is named after the scientific formula of the same name that proves the fundamental limits of precision:  in other words, no matter how much we know about something we will never know everything; the more we focus on one aspect, the less we know about another.  The Heisenberg project has two intentions:  to dispel the stereotypes that limit our ability to enjoy a cigar and remind aficionados that sometimes its best to sit back, relax, and just enjoy a smoke without overanalyzing it.  To put it simply, “Embrace Uncertainty!”  How often do we pass on an opportunity to experience a new cigar because it’s not from a certain country, factory, or made from certain tobaccos?  How often do we spend our time analyzing every flavor and nuance in a cigar rather than simply enjoying it in the moment?  So with this in mind we will not be releasing any information on the Heisenberg blend, number of cigars made, or description of strength, flavor, etc… We want aficionados to smoke the Heisenberg with as few preconceived notions as possible and so we have sent you these un-banded samples.  Just tell your customers to light this cigar up and smoke it wherever it is they enjoy a cigar the most; whether in solitude at home, with their friends at your store, or while taking the dog for a walk.  We know this is an unusual way to release a cigar.  We don’t know how it will turn out.  All we can do is “Embrace Uncertainty.”  We are asking you to do the same.

The Heisenberg project will come in 4 sizes:

Source:  Photos of samples and documentation were taken at Outland Cigars.  Leaf and Grape did not obtain an actual sample for this promotion.