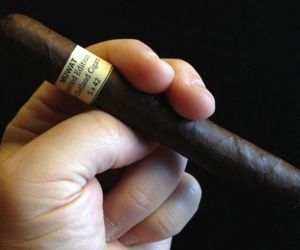 Today we’ll be taking an in-depth look at the (yet-to-be-released) My Uzi Weighs A Ton Digital Son 6. The all-new Retail Exclusive being developed for Outland Cigars in Charlotte, NC. We broke that story to you earlier in the week along with Cigar-Coop. (to read that initial post, click here)

Digital Son 6 gets it name from being the 6th vitola in the MUWAT line – and comes to us as a 5×42 Corona.

For those of you keeping track, the other 5 MUWAT vitolas are as follows:

One note about Bait Fish, it too was a retail exclusive made for New Havana Cigars in Columbus, OH. Since then, Bait Fish has been brought back in-house by Drew Estate to be sold across the country.

Like the Bait Fish, Digital Son 6 is considered an amped up EF (extra fuerte) version of the MUWAT blend with somewhat of a twist. Jonathan Drew put it this way:

“There are many elements of the EF, but with a new leaf added from different farm in Esteli. Wrapper is San Andreas, binder is Connecticut – just like all the other MUWAT.”

Another trait separating Digital Son 6 from all the other MUWATs is this, it was blended solely by Mario Perez at the Joya de Nicaragua factory.

Now, let’s get down to business and see what Digital Son 6 brings to the table, shall we… 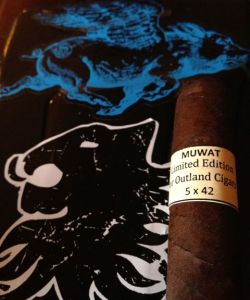 Visual: Deep, rich and dark chocolate-brown wrapper – very nice visual appeal. Solid cap – even and smooth. Seams were well hidden for the most part. A few veins created a bump here and there, but overall construction was good. Knowing these were samples, I decided to dry-box them for a few days being before firing them up for this preview. (anytime a cigar is soft to the touch, it’s a good idea to place it in a protected but open container to dry out – allowing the moisture and humidity to escape.)

Flavor: Pre-Light: I opted for a v-cut on this Corona. (which seems to be my cut of choice lately) I lifted the DS-6 to my nose and ran it back and forth just under my nostrils to get a good sense of the aroma. I was immediately greeted with a sweet brown-sugar scent coming off of the wrapper. Turning the cigar upside down presented my nose with that good old-fashioned barnyard scent, though it was slightly muted compared to that of the wrapper. The first few dry puffs presented hints of earth, leather and slight spice. Light: Upon torching the foot, the first flavor that came rushing to my senses was a blast of spice and leather – in that order. The spice was not your typical cinnamon or nutmeg, but more of an earthy cedar spice. As soon as that started to subside, leather lingered on the palate. There were hints of sweetness in the background, but early on it was all about the spice. 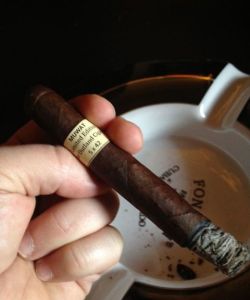 Experience: Burn: As you can see from my photos, the burn was a little on the dull side. But being a sample, I’m not too overly concerned with that. The goal here is to get an idea of the cigar’s characteristics and flavor – as well as to gain an idea for what it will be like with a little age. Draw: This cigar did not require any major maintenance. It burned pretty well for the most part without issue. THe draw was what I would call moderate resistance. Meaning it wasn’t tight by any means, but it wasn’t loose and open either. Complexity: Getting back to the flavor nuances of the DS-6, I noticed the spice had settled down somewhere around the 1.5 inch mark. The earthy leather notes were still present, along with a new sweetness that most closely resembles a mixture between chocolate and espresso. Nicotine levels are also amped up in the later stages of the stick. This is not a stick for those who prefer a lighter / milder cigar.

Those who know me know that I love a stick that produces a good amount of smoke. I’ve gone on record stating the best smoke-producing cigar on the planet is Undercrown, by Drew Estate. (Undercrown Toro was #6 on my list of Top-25 cigars for 2011) So for me, when it comes to producing smoke, Undercrown is the cigar by which all other cigars are measured. With regard to the MUWAT DS-6, it held its own producing quite a bit of smoke, albeit well below that of the Undercrown.

Final Thoughts: So, where does all this leave us? Well, I’ll go on record as stating I’m a huge fan of smaller ring-guages. So the idea of a MUWAT in a 5×42 Corona really excites me. The Liga Privada Unico Serie Dirty Rat (also a Corona) just so happens to be my favorite Drew Estate cigar. So, taking all of that in to account, I leave you with this final thought: If the pre-release samples I smoked are any indication of what the Digital Son 6 final product can be, there’s one image that immediately comes to mind…a small cigar with a big attitude. Imagine a pit-bull being stuffed in to a sardine can and you’ll get the picture. I can not wait to taste the final product.

One thought on “Cigar Preview: My Uzi Weighs A Ton Digital Son 6”