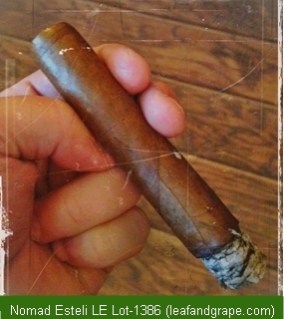 Charlotte, NC – Yesterday I had an opportunity to sit down with Fred Rewey, owner and face of Nomad Cigar Company. During our informal conversation I was given a chance to smoke his new Limited Edition blend which hails from the great country of Nicaragua – the soon to be release Nomad Esteli LE Lot-1386.

Rewey’s current core line is a rock-solid Dominican blend. We reviewed the Nomad Navigator back in February and were very impressed with its draw, flavor and over-all quality and construction. Since that time, Nomad has been a hit with select B&M shops who tend to focus their attention on boutique cigars.

As for the Esteli Lot-1386 itself, it will be a 307 box Limited Edition single-vitola (toro) made available to retailers at this year’s upcoming IPCPR Convention in Las Vegas, NV. (Rewey also has plans to release an entirely new Nicaraguan line later in the fall) [UPDATE: total production of 307 boxes confirmed at Nomad company website]

The Esteli LE Lot-1386 comes in the same stunning medium-brown Habano wrapper used in Nomad’s core Domincan line – while tobaccos used in the binder/filler all hail from Jalapa and Esteli, including a full leaf of Esteli Ligero.

Setting a torch to Lot-1386’s foot brings a pleasant fragrance reminiscent of the Nomad we reviewed back in February – hints of sweet grass mingled in amongst a mild earthiness. Flavors coming from the first few puffs produced a rich array of cinnamon and mild black pepper – nothing too overwhelming, just a nice compliment to the sweet grass and earth.

As our conversations bounced around from industry trends and favorite steak recipes to wine varietals and rock concerts, the Lot-1386 continued to tell an interesting story itself. One thing was obviously clear, the Nicaraguan fillers definitely bring a unique depth to the Habano wrapper that was not present in the Dominican version. While the Dominican Nomad is of top quality and construction, one thing I felt was missing from the blend was complexity. (a personal preference I might add) This is not the case with Lot-1386. What started out as sweet grass mixed with medium spice notes soon transitioned in to a smooth smoke with subtle rich and creamy flavors. After a few minutes things began to change again as strength increased and brought with it deeper flavors, more spice and higher levels of nicotine – no doubt a by-product of the Esteli ligero leaf mentioned earlier.

By the time I reached the end of my Lot-1386, I felt as though I had just read a short book. This cigar definitely brings more complexity and transitions to the table than its Dominican predecessor. However, that does not mean one cigar is “better” than the other, they’re just different.

So if you’re someone who prefers a medium-bodied cigar with flavors that remain constant from start to finish – I recommend the Nomad core line Dominican. However, if you prefer a cigar with more depth, complexity and an increase in strength and nicotine – Nomad’s all-new Esteli LE Lot-1386 will be right up your alley.