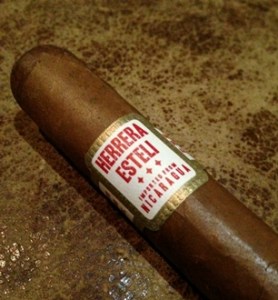 Each of the lines mentioned above are industry leaders in their own right.  But in reality, Drew Estate is much more than just infused cigars and limited releases.  By now most of you are also well familiar with Joya de Nicaragua, Nicaragua’s oldest cigar manufacturer.  Drew Estate has been JdN’s distribution arm for the last 3-4 years.  In addition, Drew Estate has also successfully launched Undercrown - an entirely new line that was based loosely around Liga Privada, but is technically NOT a Liga Privada. 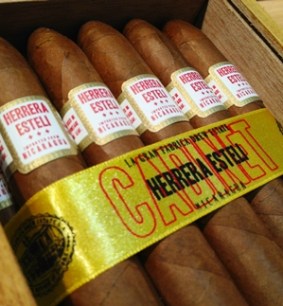 Herrera spent the better part of a year working with various tobaccos – mixing and matching blends to find just the right combination of wrapper/binder/filler for his first release under the Drew Estate umbrella.  Finally, at IPCPR 2012 in Orlando, FL the company announced an all-new line steeped in rich, Cuban tradition…Herrera Esteli.

So with all that being said, let’s get down to business on Willy Herrera’s latest blend shall we?

As we’ll soon discover, Herrera Esteli is all about Cuban tradition.  The line consists of 5 vitolas on this initial release.  Having smoked all 5 of the sizes, I have chosen to focus this review on the Lonsdale – in my opinion the line’s cream of the crop.  Details of the blend are outlined below: 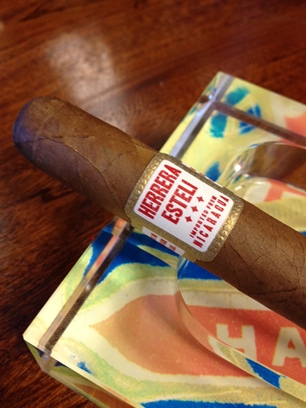 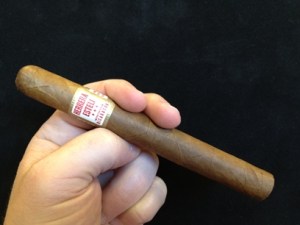 VISUAL: Classic Cuban look and feel.  Gorgeous khaki brown wrapper that is fawn in color.  The wrapper contains some veins and possesses a slight oily sheen.  The band is simple consisting of red letters on a white background with gold trim.  The front of the band contains the words HERRERA ESTELI with three (3) diamonds underneath and the words IMPORTED FROM NICARAGUA under the diamonds.  The band’s left side contains the words “We warrantee the tobacco used in H.E. are the finest vintage aged air-cured black cigar leaf.”  on the right-side of the band are the words “Handmade by La Gran Fabrica Drew Estate S.A. Frente A Las Aldeas Sos Barrio Oscar Gamez.” 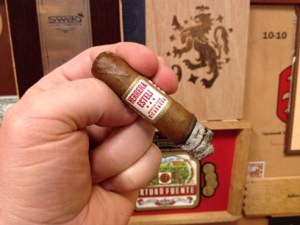 FLAVOR:  Prelight: Sweet honey notes are coming off the shaft of the wrapper; the draw has that classic, subtle barnyard flavor with slight, sweet floral notes.  Light:  A rich honey note takes center stage and mixes in nicely with floral notes present in the prelight.  Also present are undertones of wood, nutmeg and slight pepper.  As the smoke progresses, the sweetness fades to an undertone and gives way to bolder, heavier notes of earth, wood and a spice that blend in nicely with the nutmeg and hint of honey.  Overall strength started out on the lighter side of medium and transitions to solid medium and increased nicotine levels. 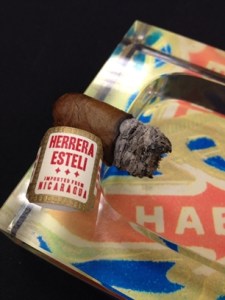 EXPERIENCE:   Burn:  Was slow, long and nearly flawless.  Razor-sharp edge with a slightly uneven burn that self-corrected itself.  The ash was light grey mixed in with a darker grey.  I should mention that each cigar smoked required zero touch-ups.  Draw:  The draw one the Lonsdale was ideal, providing just the right amount of resistance.  Overall the experience shows off the high quality put in to each cigar.

FINAL THOUGHTS:  Willy Herrera leaves his mark on yet another classic Cuban-style cigar.  Like others lines before Herrera Esteli (i.e. La Palina Goldie Laguito No.2, Miami Cigar’s Casa Miranda and Chinnock Cellars’ Terrior) this cigar is everything a good Cuban cigar should be – sweet, smooth, complex with flavor transitions that only the finest of cigars are capable of producing.  Final Score:  93