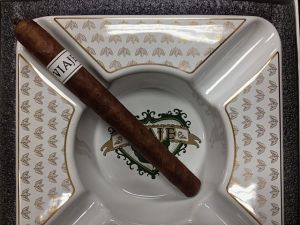 We are happy to announce the newest member to the Viaje Exclusivo family. Known simply as Super Lance, this 7-1/4 x 46 beauty is based off of the regular Exclusivo blend and will be making its way to authorized Viaje dealers in May.

The Super Lance marks the 9th vitola in the line and bears a resemblance to a cross between 2010′s Exclusivo Corona Gorda and the 2012 Atlantic Cigar Company 15th Anniversary Lancero. When asked about the specifics of this cigar, Andre Farkas had this to say:

I love the Lancero, its one of my favorite shapes. After smoking an Exlcusivo Lancero I wondered how the cigar would smoke if I opened her up a bit to a 46. I had some samples rolled and fell in love – just a great shape. Now what to call it? Well, it’s a Lancero only bigger. How about Super Lance? The name stuck and here we are.

While we expect those 25-count bundles to continue, one thing we are not certain on is the total number of bundles to be produced. If history is any indicator we should see somewhere between 50 and 200 bundles for this release. (1,250 to 5,000 cigars produced) 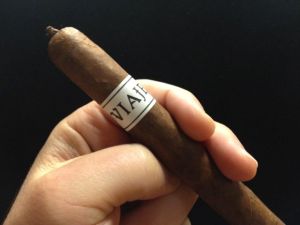 VISUAL: This cigar is simply stunning to look at – fantastic seamless reddish-brown wrapper with a tight, neat pigtail cap. Slight veins are present, but nothing out of the ordinary. The length coupled with the 46 ring gauge really makes this cigar stand out visually. The band is your standard White-Label Project band with black lettering. (standard issue with Viaje pre-release samples) In May, this cigar will be branded under the Exclusivo line. 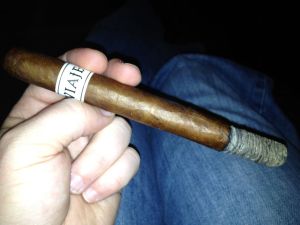 FLAVOR: Pre-Light: Using a v-cut on the Super Lance revealed a really nice pre-light draw consisting of sweet tobacco with hints of citrus and herbal-tea. The smokeless draw was light and effortless. Only thing left to do is set this one aflame. Light: Toasting the foot to a solid orange glow produced a wonderfully sweet aroma. The initial draw really took me by surprise. Those familiar with the Exclusivo line will remember an initial blast of pepper. However, this was not the case with the Super Lance. Instead, I was greeted with an ultra-smooth potpourri of the same exact flavors present in the pre-light. The smoke production is above average and the scent mixes in nicely with the sweet tobacco, citrus and herbal-tea notes. Later on, hints of sweet cinnamon or nutmeg presented themselves as a backdrop to the citrus and tea notes. One unique attribute I discovered was the smoke coming off the wrapper produced a distinct aroma of coffee. We’re all familiar with coffee/espresso flavors, but the aroma of coffee really took me by surprise. As the stick progressed so did the strength. What started out as a dead-center medium strength cigar ends up pushing the nicotine levels to full strength during the final three inches. With the increase in strength comes rich earth notes surrounded by black coffee and more cinnamon and nutmeg. 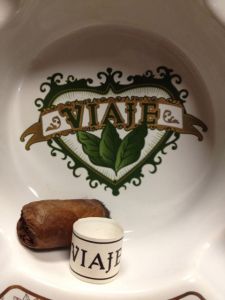 EXPERIENCE: Burn: The burn wasn’t as sharp as I had hoped – but it was even, only requiring a few minor touch-ups on two of the samples. (the 1st stick had required more touch-ups, so I let the other two sit a few weeks before smoking them for this preview) From the photos you’ll notice a marbled grey and black ash. The ash was firm and did not come off until forced. Draw: The draw itself was above average for a lancero. I feel the 46 ring gauge played a big part in aiding the air flow. Complexity: This cigar did not undergo many “transitions” per se. But what it did offer was a well-rounded mix of aromas and varying flavors that married together nicely creating an over-all complex experience.

FINAL THOUGHTS: The Exclusivo Super Lance is full of surprises, and smokes unlike any other Exclusivo I have had. Those turned off by the potent pepper-blasts from the Exclusivo Short, Robusto and Chiquito vitolas will be surprised by Super Lance’s more mature and complex flavors. One thing is for certain, I look forward to its release later this Sring.