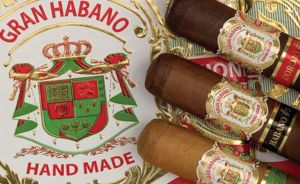 Editorial Update:
The Cigar Deli concept has been floating around for a couple of years now.  (you can read an earlier announcement from Toasted Foot back in 2010)  But it is also a concept we believe to be new for most cigar enthusiasts.  This is the main reason for telling you about it again today.  Its an idea cigar enthusiasts can get excited about and something we hope really takes off for George Rico and Gran Habano Cigars.

3 thoughts on “Cigar Deli – Custom Cigars Made To Order”