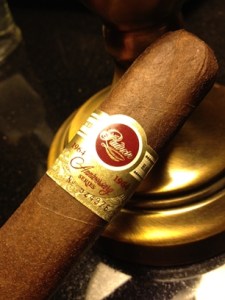 Ask any connoisseur to name the size and shape of a cigar bearing the name “No. 4″ and 9 times out of 10 you’re likely to get small vitola references to such Cuban icons as the Montecristo No. 4 Petit Corona, Partagas Serie-D No. 4 Robusto or the Romeo y Julieta No. 4 Robusto.  Non-Cuban cigar manufacturers have also incorporated the name “No. 4″ in to their lines as well – with such small vilotas as the My Father No. 4 Lancero and the Fuente Opus X Perfecxion No. 4 Petit Corona. 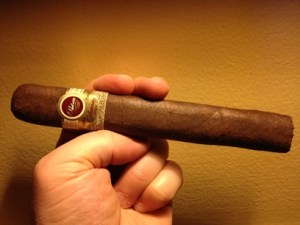 In August of 2012, Padron Cigars, Inc changed all that with a new release of their own.  Measuring in at a whopping 6-1/2 inches long and 60 ring gauge, the name given to their latest creation was the Padron 1964 Anniversary Series No.4.

The Padron 1964 No.4 is a gorgeous cigar with a slight box-pressed shape to it, simply striking to behold.  Tobaccos have been aged for 4 years and the cigars are offered in both a Natural and Maduro wrapper.

According to an article published in Cigar Aficionado, the cigar gets its name from Jose Orlando Padron - who had left Cuba in 1961, travelled to Spain, and eventually arrived in New York on December 4th.  December 4th is also significant because it is the birthday of Santa Barbara – a Catholic patron saint Padron would often pray to, in hopes of being freed from Cuba.  The Padron 1964 No.4 commemorates those two events.

Now that we have the backdrop on this striking cigar, let’s get down to business shall we? 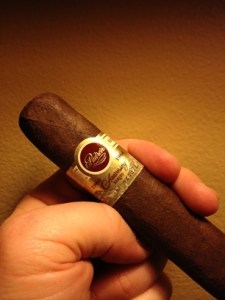 VISUAL: To start things off, the Padron 1964 No.4 comes in an oily maduro wrapper with a slight sheen to it.  The quality of wrapper leaf is extraordinary, consisting of slight veins and many raised bumps all along the shaft.  The age of the wrapper is clearly visible – I’m excited to get this beauty cut and start my prelight.  Overall construction is typical Padron - quite firm to the touch from cap to foot.  The No.4 also comes with the standard Padron 1964 Anniversary dual-band that is used on the regular coreline.

FLAVOR: Prelight: This cigar presented an up front, in your face, aroma of chocolate mixed with coffee.  Smelling the shaft presented sweet tobacco and coffee while the foot presented hints of cedar.  The dry-draw is open and flawless – revealing even more coffee and cocoa mixed in nicely with the cedar.  Light:  After slowing torching the foot of the cigar to an orange glow, I take the first smoke-filled draw.  One word, pure and simple…amazing.  The Padron No.4 presents a potpourri of world-class Nicaraguan flavors – the slight cedar picked up during the prelight is even more pronounced now, but still only a complimentary note.  I also detect a slight hints of cinnamon and earth mixing in perfectly with the coffee and chocolate flavors.  Overall the flavors are rich, distinct and pronounced.  Yet the one surprising thing to note is how mild the nicotine levels seem to be.  I fully expected this 6-1/2 x 60 box-press to present a full-on rush of bold flavors and strenth.  While the flavors are definitely there, the strength is dialed way back – this cigar smokes like a cadallac drives – extremely smooth.  The quantity of smoke being produced is well above average, and the aroma off the smoke itself is incredible.  As the smoke progresses, flavors remain fairly constant throughout and the nicotine levels remain dialed back from what I expected from such a large ring gauge.  Rich, dark earth tones present themself and compliment the hints of chocolate, coffee, cedar and cinnamon – overall a real treat and a whirlwind of flavors.  Overall strength started out on the lighter side of medium and transitioned to a solid medium. 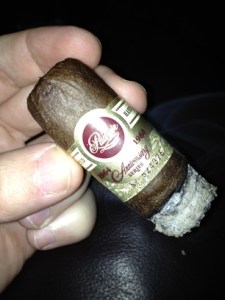 EXPERIENCE:  Burn: The burn on this cigar was amazingly even from start to finish.  Once the foot was toasted, there were no additional touch-ups required.  This cigar burned like a champ and produced a wide-array of rich, classic Padron flavors.  The one thought that kept coming back over and over again was just how tasty the stick was while remaining so soft and smooth.  From an over-all balance perspective, this is hands down one of the best cigars I have smoked all year.  Quite honestly, I’m kicking myself for not jumping on this cigar last year when it was first released.  (live and learn)  As for the burn line, it was razor sharp very thin – which speaks to the excellent combustion coming off the wrapper, binder and filler combination.  The Padron No.4 produced a silvery, light grey ash from start to finish.  The ash never came off prematurely, but it did prefer to fall off consistently around the 1-1/2 to 2 inch mark.  Draw:  As mentioned earlier, the draw was near flawless, open and easy with just a touch of resistence - perfect and just the way I like it.  At first, I wasn’t sure how I’d react to smoking a 60 ring gauge box-pressed cigar.  What I quickly learned was that the No.4 smokes like a much smaller vitola.  Between the flavors, quality of draw, the burn and the aromas coming off the No.4 – I could not believe the quality coming from such a large ring gauge cigar.  Aside from the physical size and touch, everything else about this cigar truly seemed like a smaller vitola. 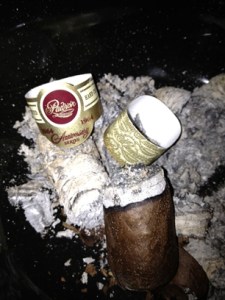 FINAL THOUGHTS:  I got the idea to smoke this cigar while attending The Great Smoke in West Palm Beach, Florida back in February.  I was walking from booth to booth, exchanging tickets for cigars, when I happened to stop by and talk with Jessica and Jeff Padron at their booth.  During the discussion I was explaining my preference for smaller ring gauges when Jeff asked if I had ever smoked the 1964 No.4.  When I told him I had not, he said if I smoked one I would be shocked at the balance and flavor.  The Padron 1964 No.4 is what I like to call a large ring-guage cigar that smokes like a small ring-gauge cigar.  The only down side to the No.4 for me is its hefty $20 price tag per stick.  Then again when you look at the size of the cigar – and the fact that its a 1964 Anniversary line – things don’t seem quite so bad.  In fact, anyone who’s big on the Padron Family Reserve line (particularly the 45th and 85th Year Maduro) will be impressed with this cigar.  This is one large ring-gauge cigar i will not hesitate to smoke again.  In a world where larger cigars are fast becoming the norm, the Padron 1964 Anniversary No.4 is among the best of the best, hands down.  Final Score: 94