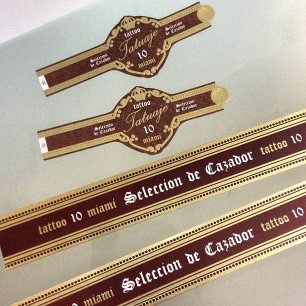 On February 2, 2013 Tatuaje Cigars posted a photo of new cigar bands for the upcoming La Seleccion de Cazador 10th year anniversary.  Labeled as Tatuaje’s first exclusive collection, La Seleccion de Cazador (aka Cabinet Selection or Brown Label) was first created in 2003 as an Old World Cuban style cigar.  Since that time, there have been eight (8) vitolas created under the line.

Here’s a breakdown of the line’s construction along with each of the existing eight (8) vitolas:

When asked about details for the 10-year anniversary, Pete Johnson had this to say:

Source:  Photo for this article was posted on Tatuaje Cigars Facebook page