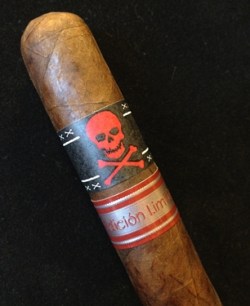 Back in the Spring of 2010, Andre Farkas – owner & founder of Viaje Cigars – release a new short robusto packed with such flavor and punch that it started a nation-wide craze.  Under the name Skull and Bones, the Daisy Cutter was not a cigar for the faint of heart.  Instead, it was one little powerhouse of a cigar that came with a solid nicotine punch.

Between 2010 and 2012, Viaje took cigar enthusiasts through a whirlwind of 13 different iterations of various Skull and Bone offerings.  Everything from Daisy Chain, Mystery, WMD and MOAB – to Little Boy, Fat Man, more Mystery, more WMD, more MOAB, a new FOAB, a few Box-Press offerings and a few Mexican San Andres wrapper offerings.  As you can see, the line went from a single unique powerhouse of a cigar, to what some would call a convoluted line with too many offerings.  Whether you are for or against the Skull and Bones marketing – or simply an enthusiast who loves to see new product hitting the shelves at your favorite B&M.  One thing is for certain – there WILL be more Skull and Bones coming, it’s just a question of when and where. 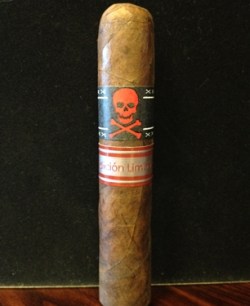 VISUAL:  Big Ivan is a meaty 60 ring-gauge cigar which comes in an oily, reddish-brown, marble-colored Criollo wrapper with a bold toothy appearance and visible veins along the shaft.  The wrapper is gorgeous, thick, contains slightly raised bumps and covers the foot of the cigar.  The cigar itself is heavy and dense to the touch, firm along the shaft – no soft spots found anywhere.  Big Ivan also comes with a dual-band:  the first band consists of a red skull and bones logo on the front and white ‘X’ marks along the top and bottom – both are set against a black backdrop;  the other band is silver and red with the words ‘Edicion Limitada’ on the front.  Based on appearance alone, this 5 x 60 cigar looks like one powerhouse of a smoke living up to the Skull and Bones name. 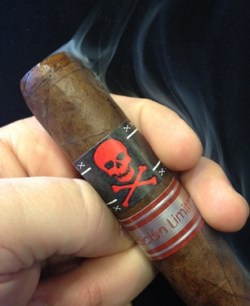 FLAVOR:  Prelight:  I opt for a straight cut – removing about 1/4 inch from the cap.  On the initial dry draw I am greeted with a rich hearty taste of pepper, earth and cedar.  I take a moment to smell the unlit foot and shaft of the cigar – which reveals that Nicaraguan characteristic, a fresh barnyard scent mixed with slightly-sweet tobacco, more earth and spice.  Light:  For the light, I chose my trusted Xikar Flash single-torch lighter.  I slowly toast the covered foot – bringing it to a bright orange glow before taking that first puff.  Once I bring the cigar to my mouth, the initial draw produces an immediate blast of pepper and spice.  There is also a good amount of smoke coming from this bad boy.  Allowing the pepper and spice to subside, it is now time for a few more puffs.  Each puff now provides more smoke than the one before.  The spice now begins to settle down – and gives way to hearty flavors of earth, leather and a rich, semi-sweet dark chocolate nuance in the background.  One thing immediately stands out with this larger ring gauge – less overall spice and a deeper, richer flavor profile than I’ve experienced with previous year’s Little Boy and Fat Man.  Each puff produces a little something new – and unlike the initial pepper blast, the flavors were more subtle, not as up front and in your face.  As the cigar progressed, I did not see a lot of flavor transitions happening.  It was more of an initial blast of pepper and spice, followed by a hearty dose of rich, earthy flavors that complimented each other perfectly.  As the cigar approached the final two inches, I noticed a distinct increase in the nicotine level.  A cigar that for-the-most-part sat in the full-body/medium-plus strength level soon catapulted itself in to the full-strength, full-body category. 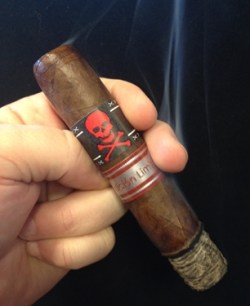 EXPERIENCE:  Burn:  From the very beginning, Big Ivan’s burn was flawless and near razor-sharp.  I never experienced signs of unevenness, canoeing, tunneling or anything – just a solid, even burn from start to finish.  As you can tell from the photos, Big Ivan produces a lot of smoke.  I happen to be a big fan of voluminous quantities of smoke, this cigar did not disappoint.  What I found to be most amazing was – with each and every puff, as I pulled the cigar from my mouth – smoke would continue to billow from the cap and foot of the cigar.  This coupled with the ominous Skull and Bones logo made for a pretty bad-ass impression.  The smoke’s aroma consisted of sweet tobacco mixed with cedar, coffee and earth.  Draw:  As I’ve mentioned before, large vitolas concern me when it comes to draw – they either are packed way too tight or too loose. Big Ivan’s dense construction and weightiness concerned me.  However, draw was never an issue.  These cigars are constructed very well, presenting only a slight resistence – just the way I like it.  Complexity:  This cigar definitely presents enough change and transitions to keep things interesting.  While it isn’t the most complex cigar ever, it does present itself very well.  Starting with the bold blast of pepper and spice up front – followed by the transition to hearty, rich flavors of cedar, earth, leather, dark chocolate and leather – finally rounding things out with an increased boost of nicotine.  Overall, Big Ivan scores well in complexity as well. 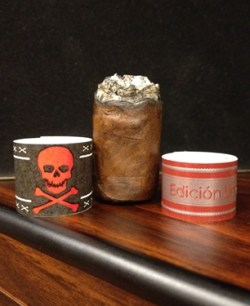 FINAL THOUGHTS:  As outlined above, Big Ivan smoked very well and presented me with a very pleasant smoking experience.  Those who know me well know I much prefer smaller ring gauge cigars over the larger 60 rg.  I am most commonly found smoking a corona, corona gorda, lonsdale or lancero - with an occasional step up to robusto/toro sizes of 50, 52 is usually about as far as I’ll go.  That being said, the 2013 Skull and Bones Edicion Limitada was easily one of the better large ring gauge cigars I have smoked to date. It is one I’m excited to smoke again.  That is, if I’m able to get my hands on any.  Seems this vitola is flying off the shelf as soon as it lands.  So be sure to stock up, otherwise you’ll be left standing there empty-handed.  Final Score: 92