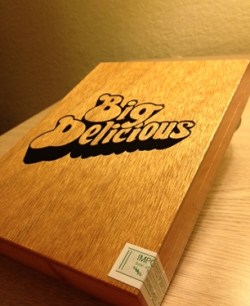 The Pre-Event Dinner consisted of the following all-star menu: Colossal Shrimp Cocktail (these shrimp were literally the size of lobster tails); a Signature Caesar Salad; main course choices of NY Strip, Truffle Butter Poached Sea Bass or Chicken Milanese with Fresh Arugula; and topping things off for desert was a Gorgonzola Croissant Bread Pudding paired with coffee or espresso. 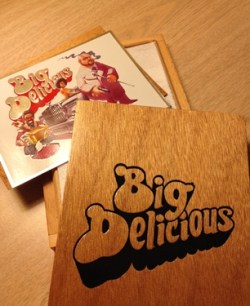 The dinner, socializing and comradery were all good – but the big highlight for me was the unveiling of the much-anticipated Smoke Inn Retail Exclusive known better as the Big Delicious. We covered the press release for you back in January. Those attending last night’s dinner were greeted with special limited release 5-pack. From the photos you can tell a lot of time and effort went in to the production of this cigar and packaging. Opening the box revealed a cartoon depiction of the Big Delicious cartoon series showcasing Room101 brand owner/founder Matt Booth as “Swanky White” and Smoke Inn owner/founder Abe Dababneh as “Big Delicious”. Underneath the cartoon card, the box was next lined with a thin sheet of cedar with the logo Big Delicious enblazed in black. (similar to the 5-count box front) Removing the cedar sheet revealed a delicately sealed 5-pack of cigars nestled inside of white onion paper. The cigars are wrapped in a high grade Habano 2000 wrapper that makes for a stunning first impressive. As seen in the photograph below, the cigar band contains the words “Big Delicious” in shining  silver sitting atop a red and white background. (the copper appearance in this photo is from the light source) The band is also asymmetrical in nature angling from lower left to upper right as it makes its way around the cigar. On each side of the cigar band are the characters “Swanky White” and “Big Delicious”. Big Delicious is a stunning 6.25 x 42-54 soft box-pressed Torpedo with a shaggy foot. Again, the high grade Habano 2000 wrapper is stunning and really makes the cigar shine asthetically. Other details of the blend are located below: 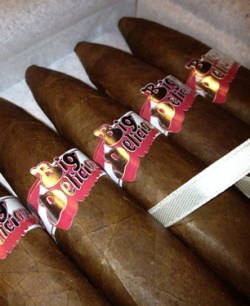 In terms of the blend profile of this cigar, the press release hints at Big Delicious being based off of one of Room101′s previous limited releases. Our belief is that Big Delicious aligns most closely with the Room101 Daruma. One thing is for certain, I can not wait to light one up today and get the full flavor profile analyzed for myself. With that being said, its time to head over to today’s main event. The Great Smoke 2013 is about to get under way – stay tuned for more details and exciting news…