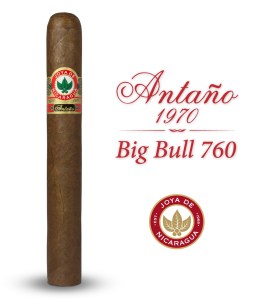 Estelí, Nicaragua - Joya de Nicaragua, maker of the authentic Nicaraguan puro, is introducing a new vitola for its popular brand Antaño 1970 at this year’s IPCPR tradeshow in Las Vegas.

Antaño Big Bull 760 is a 7 x 60 cigar and is predicted to become the most powerful smoke in the trending large-ring formats. “Antaño was born thirteen years ago as a result of Joya’s vision to push the boundaries of strength and power, and for all these years we have consistently delivered that.  Now we are satisfying the overwhelming demand from our hardcore Antaño lovers for a larger cigar, one that packs even more muscle. But be warned! This is not a cigar for everybody, its for those who can withstand a long lasting and powerful smoke” stated Dr. Alejandro Martínez Cuenca, Master Maker and Owner of Joya de Nicaragua.

Antaño and all Joya de Nicaragua brands are distributed in the USA exclusively by Drew Estate Ltd.

Antaño (pronounced an-ta-ni-o) means “yesteryear” in Spanish, a word that perfectly expresses the soul of the Joya de Nicaragua Antaño 1970. Crafted as a tribute to recapture the power and essence of the puro that made this legendary brand the most sought after cigar in the United States in the post Cuban Embargo 1970s. Made exclusively by hand and entirely of Nicaraguan harvested tobaccos, this cigar is an ultra robust, spicy smoke with unbridled body and aroma.

Source:  This press release came to us courtesy of Joya de Nicaragua.