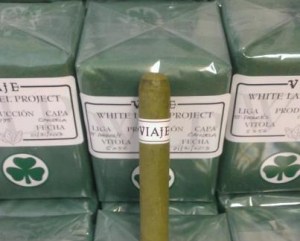 Today Viaje Cigars announced the White Label Project (WLP) Candela will be back for a 3rd consecutive year in 2013.  Shipments go out Monday, March 4th to authorized Viaje retailers  - so delivery will be just in time for your Saint Patrick’s Day celebratory smoking pleasure.

The WLP Candela comes as a one vitola release – a 5 x 52 robusto, and has been a favorite of many cigar enthusiasts across the country.

There isn’t much known about the actual blend, but here’s what we do know:

This Saint Patrick’s Day, the Viaje 2013 WLP Candela will join the ranks of these other fine green-wrappered cigars:

Switch to our desktop site